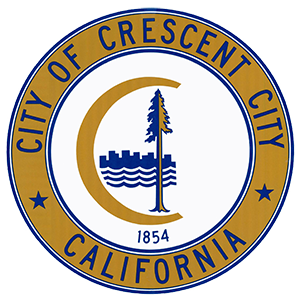 It started with a 9.2 magnitude earthquake in Alaska that sent tsunami waves surging towards Crescent City. In less than five hours, during the early morning hours of March 28th, 1964, three smaller waves pushed into storefronts and businesses causing little damage and a sense of calm in the people trying to clean up.  Then the big wave, cresting at nearly 21 feet, slammed into the Downtown, killing eleven people and devastating 29 city blocks.

This was the worst tsunami disaster recorded in the U.S., causing millions of dollars in damage and shaping what Crescent City’s Downtown looks like today. Over 289 buildings and homes were destroyed after being pushed off their foundations or damaged by rising waters, resulting in most of the Downtown being rebuilt.

But many relics and improvements from the 1964 Tsunami remain ready for you to discover on this short  historical tsunami walking tour through Downtown Crescent City, also known as “Comeback Town, U.S.A.

You’ll see high-water marks posted on buildings that survived the onslaught, huge objects pushed around from the power of the surges and memorials to the people who lost their lives during this tragic event.

After you download the PDF of the Tsunami Walking Tour brochure, you'll start at the huge, white Jetty Dolos on Front Street and follow the map inside to find the informational kiosks along the way. You can scan Quick Read (QR) Codes at each point, or navigate from the links above, to get a more immersive experience with interactive audio, video and pictures on your smartphone or internet-connected tablet.

Since 1933, 32 tsunamis have been observed in Crescent City. Five of those caused damage, and one of them, in March 1964, remains the “largest and most destructive recorded tsunami to ever strike the United States Pacific Coast,” according to the University of Southern California's Tsunami Research Center.

This is why it is important to “Know Your Zone,” while you are visiting.  A tsunami could happen at anytime and most of Downtown Crescent City is in the tsunami run-up zone. If an near-shore earthquake occurred, you would only have minutes to get to safety!

The main “rule of thumb” is when you feel a sizable earthquake, head north for high ground at 9th Street. Leave your car and walk briskly, because many of the roads could be clogged with cars or building debris. Do the same if you hear the tsunami sirens go off! There will be no mistaking when they do. Don’t panic and follow the “Tsunami Evacuation Route” signs to safe ground.

The map to the right is from a Tsunami Safety brochure that you can download from the Del Norte County Office of Emergency Services website along with other helpful tips for a worry-free stay. Just click on the map to open it up on your smartphone.

Be Tsunami Safe and Know Your Zone!